riting in the World of Avatar 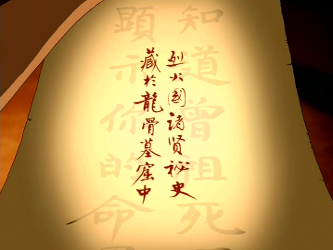 Writing and Literature form an integral part in societies all across the World of Avatar. All cultures use a common system of characters borrowed from the Chinese system for daily purposes. The four lands primarily use writing for communication and literary purposes, but there are some such as skilled swordsman who practice calligraphy. 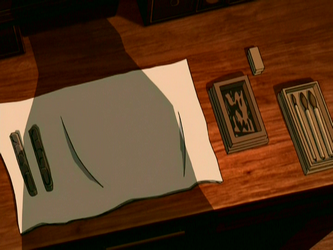 Writing in the Avatar World is achieved through several means. This is primarily through the use of brush, ink and paper; however, there are also engravings. The actual written language is Chinese, with thousands of characters made up of different kinds of strokes, and is usually written top down, right to left, though this is not always the case.

Characters
Traditional Chinese characters are used for all writing in the Avatar World. There are tens of thousands of characters, but only a few thousand are required for day-to-day communication. There are several types of characters used in order to complete a sentence and thus be able to make text readable.

There are a few more categories, but the above are enough to summarize the types of existing characters.

Calligraphy is a form of art where one writes, or rather, draws or paints characters in a particularly artistic way to emphasize its beauty and shape. The paper, ink, brush, and inkstone are essential implements in calligraphy. A paperweight is also used to keep the paper straight and flat on the table, negating the need for one’s hand to touch the clean paper. Only the highest quality types are used. Calligraphy is uncommon but certainly not unheard of, especially among the upper classes and masters of the arts (bending, swordplay, martial) as a practice of precision and focus.